skip to main | skip to sidebar

I've been getting some great deals lately and loving it. Nothing makes me feel like I'm doing to my part to make our family "work" more than getting great deals. Last week I went Target and got over $20 worth of products for $6.04. Later today I am headed to CVS to get boxes of cereal for next to nothing. But what has me really excited is this... 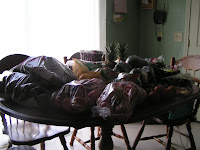 Sorry the picture quality is so bad. It is next to impossible to photograph anything in my kitchen b/c of the sunlight. Maybe this will help you get an idea... 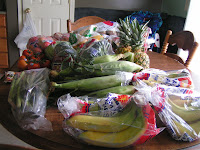 Okay, so just in case you can't tell what you are looking at...
10 ears of corn
1 3/4 lbs. of asparagus
2 2/3 lbs. of tomatoes
10 lbs. of apples
3 lbs. of onions
2 heads of lettuce
4 bunches of broccoli
9 lbs. of bananas
2 pineapples
6 pounds of strawberries
and one teeny tiny little of carrots and one teeny tiny little bag of apple slices (both of which were free with coupon)

Anyone wanna guess how much I spent??? Come on, you know you wanna...

Martin's is running an Elkhart County only produce sale today. The place was packed out and there were NO shopping carts but by golly, it was worth it.

Be watching my blog for recipes and things I make with all my produce from today. I plan to chronicle my "freezer adventure" here and hope to give you, my readers, some ideas.

Today has been a great day. Good deals, sipping sweet tea, and I get to be mom and wife to these 3 rockin' dudes... 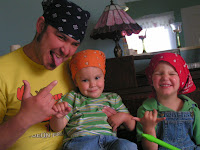 8 or so hours of scrapping = 7 Layouts complete!

And here they are...all of these will count towards my Layout A Day Challenge!

I have thoroughly enjoyed having NO babysitting kids this week. I don't even think I've realized how much I miss my boys. I am sure that doesn't make any sense to someone who doesn't provide in home daycare services. But really, during the week I am so busy tending to children, making meals, cleaning the house, etc. that I just don't take time to enjoy Micah and Eli. And that is NOT good and it NEEDS to stop.

Anyway, I have had a blast this week just spending some quality time with my little guys. We haven't done much but I have intentionally slowed down and made myself NOT clean anything. In fact, I even left dishes in the sink overnight like three times and laundry day came and went without doing a single load. (Just typing that makes me cringe but it has been sooooo worth it!) Today we went to the carousel and browsed around the toy store at Davis Mercantile. We also went to Yoder's and the boys picked out a couple of trinkety type toys and a bunch of little cookie cutters for their play-do obsession. It was so funny to hear Micah talk about "going to the carousel with the pretzels downstairs..." He was just so excited!

The weather has been fairly nice the last part of this week, especially considering we had 3 inches of snow on the ground on Monday. So I think tomorrow we will try to get outside and play a little and I will force myself to sit and play chalk with them, not clean the garage or pick up sticks in the yard or whatever other "task" comes to mind. I will just enjoy being their mommy and having just them for one more day. I love my babysitting kids (and I have missed them this week) but I am so glad that I get to be Mommy to the two best little boys in the whole wide world!

Well we got the news today that Andy did not get the "dream" job. Okay, maybe not really a dream job but it would have been a really, really nice one. The interview process drug on almost a month and after the last interview they (the company) left us feeling like it was just a formality of interviewing the other candidates and they would call us with an offer soon....Guess not.

I didn't want to get my hopes up because we've been there before and it hurts when you get let down. I was pretty sure that I hadn't gotten my hopes up....guess not. I am pretty bummed. My faith isn't shaken but I have found myself questioning God this evening. I know He has my little family firmly in His grip but it would help if I just knew why.

The worst part is seeing my husband like this. He is disappointed and questioning himself. There is nothing more he could have done. In fact, he did it all and he did it well. He is an amazing person and will bounce back...probably by tomorrow morning if I know him like I think I do. My husband is a hard worker and loyal employee. He has an overall great attitude and lots of drive. Everything he knows he has taught himself and he is still learning everyday. He is my inspiration and my laughter. He is a dedicated father and has the best heart. I love him and I am so proud of him!

I was asked to be a part of a new recipe blog. There are a lot of talented cooks over there. Go check it out. Cooking What?

Lately I've been letting stuff get to me. Stuff that shouldn't bother me really gets under my skin. Things that I can't control or something the kids do. Really it is all just stupid stuff but I've let it get to me and I start throwing myself a pity party. The mind is a powerful thing and I could probably convince myself of just about anything. I mean really, my house is way dirty and people look down on me because of it. And Micah is so much more stubborn than the average 3 year old. Eli's lungs are much more powerful than any other kid alive. And my babysitting kids whine more than any other kids in the whole world. We never, ever have any money...ever. It is that kind of thinking that gets me depressed. When I start focusing on the things that are irritating me and not on the One who meets all of my needs, everything looks dark. I forget that I am so lucky to be a Stay-at-Home Mom and clean my house whenever I want. I forget that Micah is the sweetest 3 year old I have ever met. I forget that Eli is joy all the time. (seriously ALL the time) I forget that I have the privelage of babysitting 3 little human beings and investing in their lives. I just forget everything that is GOOD about my life.

So this morning when I woke up to the dog's poop all over the living room, 2 cranky kids, 2 extra kids, and a weeks worth of laundry, I wanted to sit down and pout. I wanted to focus on how awful my life was and for awhile I did. This morning I was miserable and I made everyone around me miserable too. And then in a still small voice, there He was. Here I am. Looks at me. He was there, waiting for me to see how wonderful He is...even if I have to see that while cleaning up the dog poop, fending off 4 cranky children, and the dryer buzzing. Despite all of the other stuff, He IS wonderful. So that's what I am trying to think about, even when things are crazy and chaotic. I am trying, I really really am...

Today was a definite "madness" day. Actually it all started last night. We told Micah that we would take him to Dairy Queen if he ate his dinner last night. He did. So we went to DQ and enjoyed our ice cream but I had noticed that Eli didn't eat a single bite. He was laughing and squirming all over the bench but not eating any ice cream. As we are getting ready to go, Eli begins fussing and something inside me (motherly intuition, maybe?) just knew what was going to happen. Right then and there he proceeded to vomit...3 times. I'll spare you the details but it was a mess and he was miserable. He still wasn't quite himself today but only vomited once. Micah was a trooper last night but laid around most of the day and ran a fever on and off. I woke up (can you call it waking up if you never actually got into a good sleep?) feeling pretty poorly and with a huge headache. So my dear Andy graciously stayed home to doctor all of us. It turned out to be a nice, mellow day around our house. We watched a few movies, ate lots of saltines, and tuned into the first day of the NCAA tournament.

Speaking of the NCAA tournament, Andy and I decided to fill out brackets and follow March Madness this year. I use to do this every year for many, many years but haven't done it since high school. Andy, on the other hand, well I'll just say that I highly doubt he's ever filled out a bracket! Poor guy. Anyway, we aren't entirely sure what we're betting on but so far he's ahead of me by one game. It has already been a blast watching the games and giving each other a rough time when one of our chosen teams ends up losing. Who knows, maybe we'll start a new yearly tradition?

Where have I been???

Wow, it has been a long time since I've posted anything on here. I was recently asked to join a recipe blog and I'm hoping to get this back up and rolling again at the same time. How about an update on the boys...

Micah
Oh Micah, where to begin...He is such a complex little person. He is very active, very imaginative, very mechanical, very strong-willed but very, very sweet. His favorite saying is, "Why?" I've come to the conclusion that he uses it just as a filler word. Much like we would use the word, "Um," he uses, "why?". Yes, sometimes he really wants to know why but after the fifth or sixth why I begin to wonder. He loves playing with tools, cars, trucks, and tractors but also Play-doh, scissors, crayons, and paint. He is learning his colors and shapes and is counting things, independently, up to 4. He loves his brother and sometimes you can actually tell! :)

Eli
What a calm kid! (Now that I've written that he will wake up a bear tomorrow...) Eli is such a sweet little boy with the most even temper and a heart full of love. Often when Micah is in time-out you will find Eli right there with him; rubbing his brother's back and saying aye aye. Much like his brother, he is very mechanical and loves to play tractors. He has a great sense of humor and the funniest expressions. He has recently learned that he can yell and will do so at random times. He is a force to be reckoned with and yet a gentle giant. At his 18 month check up he was almost 28 pounds and 34 1/2 inches tall. He has started using 3 word sentences but still needs a lot of interpreting.

Julie
I've been married to my loving husband, Andy, since 2004. We are the proud parents of 2 boys, ages 3 and 20 months. I am a stay at home mom and in home daycare provider.